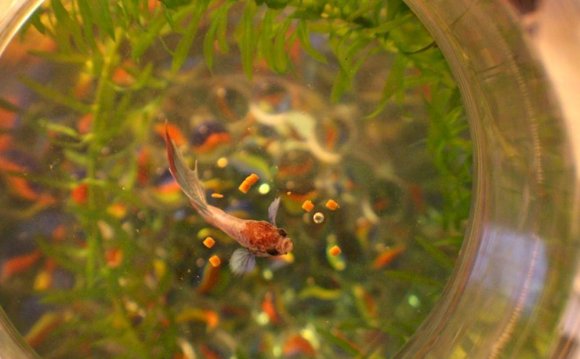 In the following list, all these symptoms must happen gradually over the span 3-8 months, not were days. If any of these symptoms surface within a few weeks, then it is most likely the result of an illness, often brought on by poor water conditions (but not always). Also, an old betta may only show a few of these symptoms.

Our hair color fades with old age and so do scales. Once vibrant blue scales may slowly turn into a shade of brown or gray over time, with only the hint of its former color.

Stops Making Bubble Nests (if he ever did)

Some healthy, in-their-prime bettas make bubble nests every few weeks in the hopes that a female will come by and mate with them, and some bettas only make a few nests within a year. Some may never make bubble nests and are still healthy, viral boys. Bettas are individuals and they won’t behave in the same way, but their sex drive will lower once they’ve past middle age, so if bubble nests become less frequent over time, this would suggest an aging betta that isn’t interested in procreation anymore (or at least isn’t preparing for it).

Yep, they sleep a lot. How often they sleep depends on their age, but the older they get, the more frequent the naps.

Did your betta have beautiful, perfect fins in the beginning, and now they look ragged and curled at their ends? Like hair losing its lushness in old age, old betta fins may become frayed or twisted over time. If it’s not illness or old age, it may be the pH, as harder water tends to make the ends on fins curl.

The Appearing and Disappearing White Dot

I cannot find an article that states what this is exactly, but I have read at least one article saying this is a symptom of old age, and I can confirm it with one of my oldest bettas. You might think it’s ich, but ich will look like the fish has been sprinkled all over with salt. This mysterious lone white dot will appear on your betta’s face and a week later it will disappear on its own. As the betta gets older, this white dot will keep popping up and vanishing more frequently on the different parts of his head. It appears harmless, but I would check water parameters to make sure that’s all it is.

In time bettas can lose their vision due to old age. This will result in bettas lunging for their food and missing their target.

Despite eating like he always has, a betta will slim down once he’s over the hill. His appetite may also decrease, but this isn’t always the case. Either way, they get slim.

Again, these symptoms should happen gradually, worsening as months go on. Long fins are an indicator that he is at least a one year old, but bettas in their prime should not have any of these symptoms unless they are ill or stressed. Always check ammonia, nitrite, and nitrate in your tank water to be sure they are living in a healthy environment. These fish should have at least 2.5 gallons of water, but 5 gallons is ideal. They also can’t live in watercooler than 78 degrees, and filtration is a must in 5 gallons.

Caring for an Old Betta

The water level should be low enough so the fish doesn’t exert himself to breathe but still high enough for adequate filtration. The water level depends on how advance the betta is; if half the time you catch him napping or resting on a leaf, it would be best to keep the water no higher than 8 inches. If he seems to be resting almost all the time, I would keep it at 5 inches maximum.

Turn Up the Heat

They aren’t swimming around burning energy like the used to. For older bettas, keep the temperature on the higher range, such as 81-82. This will ensure they are kept warm when they’re napping and it reduces the chance of illness.

Old bettas take naps throughout the day, so provide them with plenty of comfy sleeping spots. Plentiful silk or live plants will do, especially taller ones—as they will allow the betta to sleep near the surface, in case he needs to breathe quickly.

Wiggle Food or Use Frozen/Wet Food

If they’re blind or practically blind, be sure they know food is around. If wiggling the food doesn’t get their attention, then you may have to change their diet to wet food, as these will provide a strong odor. Thawed bloodworms, beef heart, and brine shrimp are ideal choices. I’ve even used tiny pieces of wet cat food with no ill side effects. If you can smell it, your betta will find it.

It doesn’t take much to kill an old fish. The tiniest amount of ammonia, nitrites, or even nitrates passing 20ppm can lead to fin rot and internal bacteria for an old fish, dooming him. So keep the water as clean as possible. With an old betta, I wouldn’t let nitrates get past 10ppm, and would try to keep it around 5ppm if his health is declining.

Freshwater salt can help prevent diseases and infection in fish with low immune systems, so I’d recommend a teaspoon for every 5 gallons for an old betta. If your betta does exhibit fungal or bacterial infections, change it to a tablespoon per 5 gallons until he is cured. This amount is safe for invertebrates. Always dissolve the salt in a separate container of water before adding to the tank, as dissolving salt can burn gills.

Apparently salt is a controversial item, with some saying it doesn’t do anything for fish. I’ve never had ill effects from using salt for my bettas, and I usually don’t use salt unless I suspect they are ill. Salt can hurt scaleless fish though.

Once an old betta gets sick, it’s likely he won’t survive. If you don’t want to use salt—or, in addition to salt—you may try medication as a last resort. Because fish meds can do more harm than good, I wouldn’t use meds unless he stops eating, and I’d have to be sure which illness he has. Maracyn I and 2 combination is a safe and broad treatment, but it most likely will kill your beneficial bacteria, so keep an eye on ammonia levels—this goes for all medication.