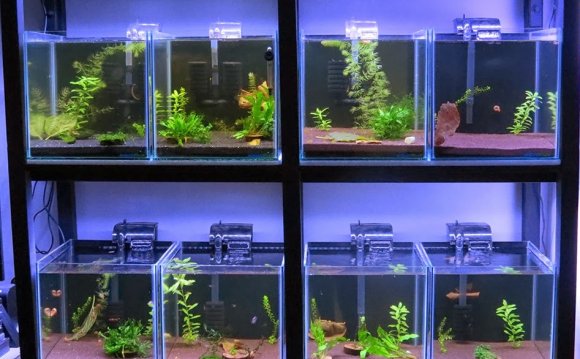 There are a few basic steps to breeding bettas. These steps are the general procedures for breeding and not absolute, meaning once you gain experience, you can vary the steps as you prefer.

1. Before breeding the bettas, choose the pair of male and female with the characteristics that you would like to see in the fries. A pair with similar colour and fin type will produce better results than a mixed pair (i.e. different colour, different fin type) 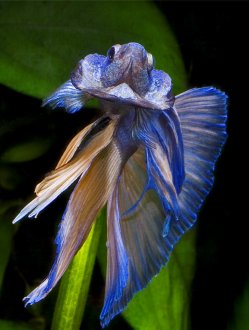 2. After that, the bettas have to be conditioned for breeding. Lots of live food will produce best results in a shorter time as compared to using processed food. Live food that can be used include bloodworms, tubifex worms and daphnias. Mosquitoes larvae are said to be the best food for conditioning but it is quite difficult to catch or culture these. You can use other food like meat which are chopped up or small insects like fruit flies. Feed the pair more during this period of time. Feedings can be twice daily up to 4 times depending on amount of food at each feeding.

One convenient type of food that works very well is the frozen live food, like frozen brine shrimps and frozen bloodworms.

The bettas should be placed in two containers which allows them to see each other. Both bettas should start to flare at each other, with the male starting to build a bubble nest. The female will also put on "weight" by producing eggs in her belly. Her belly should swell to be quite big and become pale as the eggs strain against her belly. This will be fast if live food is used and slower with processed food. The conditioning period is about 1-2 weeks. Some breeders prefer a longer period to let the female produce lots of eggs before mating them together. Check to see that the female's belly is big and the ovipositor is portruding out of her belly.

Note:Tubifex worms are suspected to be sources of disease and other undesirable bacterias. Not advisable to use them but they produce the fastest results. Daphnias (Monia) are known to produce a laxative effect on grown bettas when fed in excess.

3. The breeding tank can be from a 1 ft tank to a 2 ft tank. Roughly from about 8 to 15 gallons. The bottom should be bare to allow the male to pick up the eggs more easily. The water level should not be too deep to allow the fries to develop their bladder and labyrinth properly. The water level should be about 4 to 5 inches. Place a styrofoam cup that has been cut into half on the water surface and stick it to the side of the tank. This is for the male to build a bubble nest. The male can be shifted into the tank about halfway through the conditioning or just before breeding.

4. At the end of the conditioning period, place the pair together in the tank. There will be lots of flaring and chasing and even some biting. After a while, the male will concentrate on building his nest and enticing the female to go over and take a look. Once everything is ok, they will mate.

The male will wrap his body around the female's and squeeze the eggs out and fertilizing them at the same time. A moment after that, both will seem to be stunned and male sink down and female float up. (This sinking and floating of the male and female was what I observed, so not sure if it is always true) Then the male will usually recover first and pick up the eggs to his nest. the female will sometimes help the male in this task. There are cases of the female and male eating their eggs. So don't give up if this happens, just keep on trying.

The mating can last quite long, up to 4 hours as reported by a breeder.

6. After one to two days, the eggs should hatch. The fries still have their embryos and will feed on them for up to two days. The time frame are estimated as it depends on the temperature of their surroundings. In most cases, higher temperature translates to faster hatching and growth rate. The fries will seem to hang from the nest and are almost vertical.

7. After their embryos are consumed, they will start to swim horizontally. This can be as fast as two days up to 4 days. As the tank will contain some infusoria, those that grow and consume their embryo faster will eat these. But to ensure that they do not starve, other forms of food have to be prepared for them. Information on fry food can be found below.

After about four days, the male should be removed.

The fries should be fed bbs up to two weeks or more, thereafter other food can be used. Frozen brine shrimps and bloodworms can be fed after two weeks. But the fries must be large enough to eat them, if not, continue feeding with bbs ( baby brine shrimp).

At two months old, the males can be jarred. This will be the time when they start to show their potential in terms of colour and finnage. The males will start to squabble and fight among each other. To prevent fin damage, the more aggresive ones should be jarred.

Infusoria is a term for microscopic organism found in water. If you want to increase the amount of infusoria in your tank, just add a lot of plants or